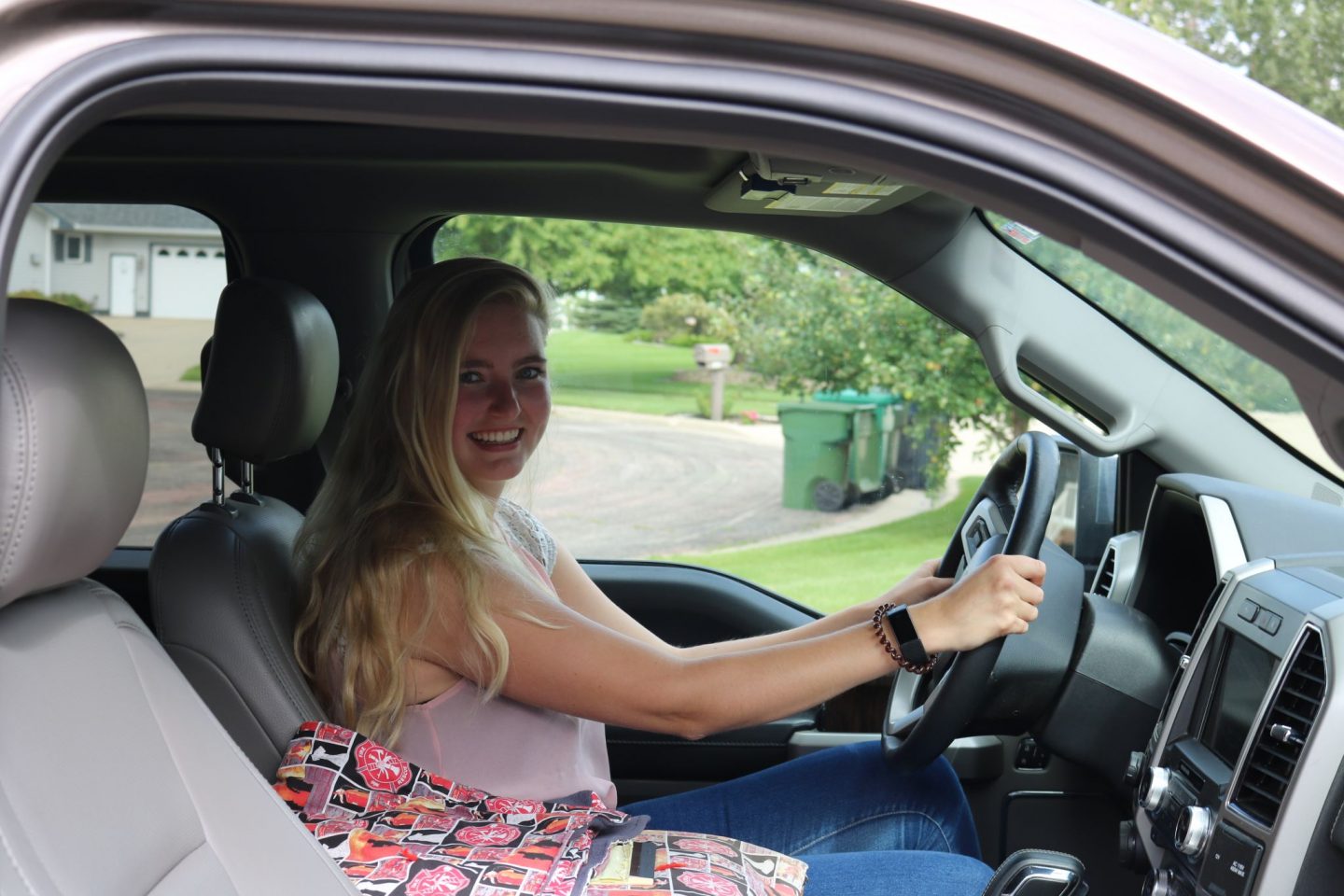 Driving isn’t my biggest talent. It took longer than an average person for me to get my license and sometimes I find it a bit scary to drive. It does get better and I am not afraid to drive on my own (and it gives me a lot of freedom!). I don’t own a car, but sometimes I get to drive the one from my mom or dad to keep up the driving. They have ‘normal’ cars with a gear stick and until last summer I had never driven in an automatic car. The first time I did, was in a big American truck.

After graduating high school I moved to the United States for one year to experience the American high school. I stayed in a hostfamily and I am still in touch with them. (I always tell people I have two moms and two dads.) Last summer I went back to South Dakota to see my family and I got the change to drive an American pickup truck. .

Do I really get to drive?

Together with my boyfriend, American dad and uncle, I went to visit my old high school in Waverly. It’s about a 20 minute drive from Watertown. After walking around the school (there has been a lot of changes since graduation) and talking to the principal, it was time to get back to Watertown. In the parking lot I was told that I would be the one driving back and that was quite shocking news for me. Because I wanted to try something new in 2019, I took the opportunity to drive the truck. I sat down behind the wheel and was quite impressed by the size of the vehicle. The backseat is just a different experience.
The truck is automatic and only has two pedals, the gas and the break. Before starting the engine I had to make sure the left pedal is the break. Believe me, everyone in the car panicked.

Before I actually started driving, I already felt some nerves. I put the car in parking mode, instead of driving and when I finally started moving, it was very slow. Taking some turns in a BIG American truck, is quite different from taking turns in ‘small European  car’. I took the first few turns a bit too big, so it’s a good thing that the roads in South Dakota aren’t crowded. Way slower than the maximum speed, I drove on the abandoned roads towards Watertown. Between the cornfields and feelds of grain, there was me, driving the big truck. To be honest, it felt quite good.
When I was living in the US, I was dreaming about being able to drive, simply because I could avoid the school bus. Now, five years later, I was really driving from Watertown to Waverly.

Driving on straight roads went quite well. (Not a lot can go wrong when you are driving slow and not having to take turns.) So Henry thought it was time to teach me a bit of ‘culture’, waving at the people driving by. That turned out to be less easy than I thought. The first time I waved through the side window, so the oncoming traffic didn’t see me. The second time I was too late and the third time was too short. When I finally seemed to get ‘the wave’, the upcoming driver was a cop and you don’t wave at them.

Even though driving straight goes quite well, taking turns with such a big vehicle is quite complicated. While I was busy talking (to not feel any fear) I took a turn, a little bit to big and hear some screams of fear from the backseat. My uncle was quite scared by my driving skills and if I believe Henry, he as never heard Rick scream as loud during his life, oops.
Besides the screams of fear, I took everybody home without making any injuries and the truck is still in a good shape. So I can say it all went well and I would do it again. But I don’t see myself driving one without anybody next to me.